Block Trump Nominee for US Sec of Education 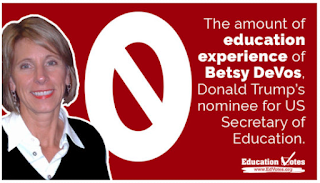 1. Betsy DeVos has no training or experience in education.

She has never worked in a school in any capacity, and does not hold a degree in education (nor did she or her children ever attend a public school).

2. Like Donald Trump, DeVos is an ardent supporter of “school choice” privatization schemes, despite a complete lack of evidence that privatizing public schools produces better education.

In Michigan, Betsy and husband Dick DeVos have pushed for decades for so-called “choice” schemes and corporate charter schools, most of which have performed worse than the state average. They are long-time Republican party donors who support pro “school choice” candidates, and Betsy DeVos has served on the boards of two major groups leading the charge to privatize public schools.

3. DeVos has invested millions lobbying for laws that drain resources from public schools.

In 2000, Michigan voters rejected a massive effort led by Betsy and Dick DeVos to change the state’s constitution to allow private school voucher schemes that siphon money away from public schools. But Betsy DeVos has promoted these measures as chair of the American Federation for Children, and the DeVos family has spent millions to push for the expansion of vouchers in other states.

4. DeVos has fought against the regulation of charter schools.

The DeVos family gave nearly $1 million to GOP lawmakers in the Michigan legislature who gutted a bill that included accountability measures for charter schools in Detroit. Those charters will not be subject to the same oversight or regulation as public schools, even though they are funded with taxpayer money, thanks largely to the DeVos family.

5. Betsy DeVos is not a good fit for a position overseeing the civil rights of all students.

Donald Trump’s nomination of DeVos is deeply concerning to many civil rights groups, because school choice schemes promote racial segregation and undercut civil rights enforcement that is routine in public schools. Corporate charter schools have higher than average teacher turnover and closure rates, which disproportionately affect students of color and low-income families.
The DeVos family’s support for anti-LGBT causes is well-documented. Since 1998, the DeVos family has given more than $6.7 million to Focus on the Family, a group that supports “conversion therapy”—a debunked theory that purports to change the sexual orientation of gay and lesbian individuals that is strongly opposed by the American Psychiatric Association, the Human Rights Campaign, and scores of other medical and civil rights organizations.

Please comment respectfully and please do not engage in personal attacks.

Educating the public
about Public Education.

Donate to CAPE either with PayPal or Credit Card